Options for Migrating to a VMware-based Cloud

Coming to the end of a support contract for your on-premises IT infrastructure?

Will you be buying a bunch of new, shiny X86 servers, a new SAN and an all-10Gb network?

Or, perhaps you’re putting your toe in the water, and looking to adopt a hybrid approach with infrastructure both on-premises and in the cloud?

When migrating services from on-premises to the cloud, there are a number of different options to be considered.

Do you move what you’ve already got because it all works, or do you build again from scratch, perhaps taking the opportunity to rearchitect different aspects of the application?

If you’re wanting to keep your applications largely the same, then there are several ways to accomplish this:

1. Simply move/copy the VMs to the cloud provider in their entirety – taking advantage of the fact that a VM is just a number of (rather large) files on disk.

2. Migrate the VMs using disk replication technologies over a longer period of time

The decision between the two really comes down to how much application downtime is acceptable.

For people running VMware vSphere on-premises, it is easy to export a VM as an Open Virtualisation Format (OVF) set of files, which is sometimes compressed into a single OVA file. This can then be imported into a VMware-based cloud provider, such as iland, over the internet, or by sending a large USB disk with OVA images on-board to be uploaded locally to the cloud provider. 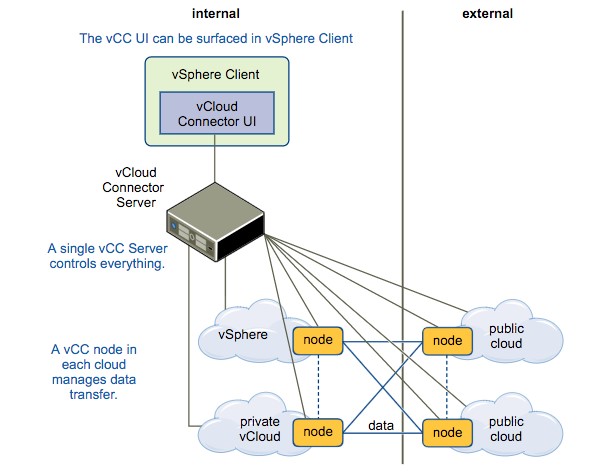 To automate this process for many VMs, VMware provides vCloud Connector (VCC) which is a multi-part solution comprising a server and one or more nodes to enable the process as shown in the diagram on the right.

The server and node components are available as OVFs in their own right, and can be installed to run within an on-premises vSphere/vCenter implementation. If a customer is already running a private cloud based on vCloud Director, then a node can be installed into that as well.

A VCC node can then be installed into a vCloud Organisation within a public cloud provider, which is then securely exposed to the internet, and the various components are connected together using https, all driven by the server component.

Once configured, vCloud Connector is presented as an additional tab within vCenter, and administrators can automate the process of exporting and importing VMs between vSphere and various private or public vClouds. In essence, they have a Hybrid Cloud!

Migrating a VM or set of VMs in this manner can take several hours or even days depending on the size of the VMs, and the bandwidth between sites. This method can only really be used for VMs that can afford that sort of downtime.

When there is little opportunity for downtime, it may be better to look at replication solutions. These will initially synchronize a VM with the cloud site, and then apply changes as updates are made to the source VM. The benefit of this approach is that the VM or application can continue to run while it is being sent over to the cloud, and at a convenient point can be cut over with very little downtime for the service. Groups of VMs that make up a service can be grouped together to ensure that the application is synchronized as a logical entity.

A small management server is installed in a Windows VM within the customer’s VMware environment (the Zerto Virtual Manager) and an even smaller VM is installed onto each ESX host (the ZRA). Following the initial synchronization, the ZRA intercepts all writes to the VMs and replicates them across to the iland data centres.

The solution is able to fully orchestrate the failover from on-premises to cloud, including the migration of network elements so that the VM will come up in the cloud site with no changes required on the VM. Customers can also test that the VMs come up correctly in a sandbox environment, prior to making the final switch, while continuous replication continues in the background.

Zerto is used primarily as a Disaster Recovery replication solution, but due to the monthly subscription licensing, it can be used as a cost-effective migration tool.

I’d be interested to hear your experiences in migrating workloads to VMware based clouds. Drop me a message below or at rstinton[at]iland.com